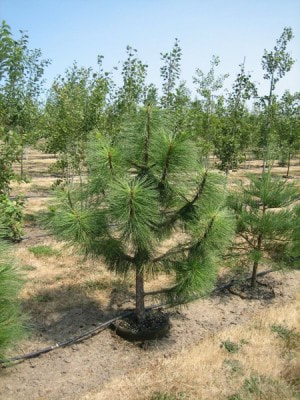 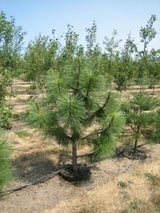 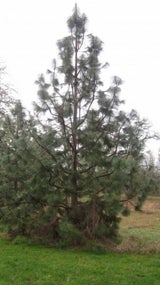 Habit: this is a fast growing, long lived conifer with a conical to rounded crown. Branches usually exist only on the upper half of the tree. The bark on younger trees is dark brown to black; as it ages, it turns a beautiful rusty brown and orange color with a scent of butterscotch. Green needle like leaves are in fascicles of three and 5-10 in (12-26 cm) long. Needles remain on the tree for only 3-4 years with major needle drop occurring in September and October. The seed cones are woody and have spiny tipped scales.

Ecology: found from Southern Canada to Northern Mexico and east into the Dakotas, in open dry forests at elevations between 500-7500 ft (150-2300 m).

This tree with its native understory is an excellent erosion control cover. It is one of the best evergreens for windbreaks. It provides a food source for birds and small mammals. Morphologically similar to Pinus jeffrey, with few differences and growing better at lower elevations. The tallest Pinus ponderosa was recently discovered in Southern Oregon, surpassing the otherwise tallest Pinus lambertiana, making the ponderosa the tallest pine in the world.