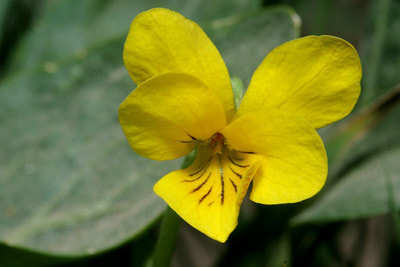 Habit: this charming yellow viola has stems and basal leaves that grow from short erect rhizomes. Its fleshy leaves are typically hairy, ovate to lance-shaped, and vary in width from narrow to quite broad. Leaf margins are entire to serrated and become tapered at the base, where they connect to the petioles (leafstalks). A pair of tiny and slightly toothed leaf appendages is found at the base of some of the petioles. The delicate flowers bloom mid-spring, each one displaying 5 bright yellow petals. Lower petals are purple-veined and upper petals are maroon on the back; lateral ones are slightly bearded. The plant is equipped with exploding capsules that burst open and disperse seeds by shooting them in all directions.

Ecology: inhabits grassy slopes, valleys and oak savannas, usually in the shade of shrubs and taller plants. It is widespread in Western North America, from Canada to central California, Utah and Colorado.

Growing conditions: enjoys sun to partial shade and moist to dry soils. Viola praemorsa is ideal for a wildlife garden. During its long bloom period, typically from April to August, it can provide nectar to numerous butterflies and other hungry beneficial insects. When dormant, Viola praemorsa loses all leaves

Due to the strong similarities that Viola praemorsa shares with the species nuttallii, this species is considered by some to be rather a variety of the latter, known as Viola nuttallii var. praemorsa. The plant also has been given multiple common names, including canary violet and yellow montane violet.