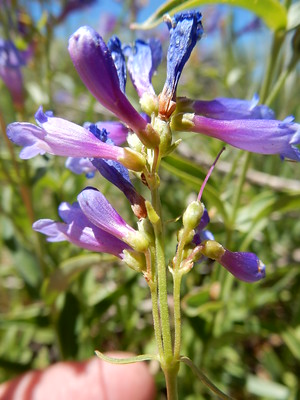 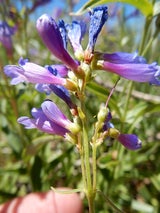 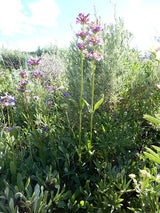 Habit: This wide-ranging penstemon has attractive whorls of deep purple flowers arranged in circles along the upper part of stems, and as a round-topped bunch when terminal. Flowers are tubular and about a half-inch long. They open up into 2 lips at the wider extremity, allowing the white base of the corolla to be seen. Flowers are smooth, lacking glands that are common in other penstemons, and bloom from May to August, depending on elevation. The leaves of this species are lanceolate to elliptic and form distinct rosettes at the base of the plant. A few smaller leaves grow sparsely along 8 to 28-inch, usually hairless, upright stems.

Ecology: usually settles in moist meadows and in the open slopes of foothills. It is found at mid to high elevations, from central Washington to the Cascades and Sierra Nevada in the south, and eastward to eastern Colorado and New Mexico.

Growing conditions: sun to partial shade. Meadow penstemon prefers moist soils but can tolerate extremely dry ground as well. It looks lovely in a meadow garden along with other native plants such as Sitka Columbine (Aquilegia formosa), Triteleia species and especially with Castilleja, beautiful flowers that form a hemi-parasitic association with certain plants, including Penstemons.

A few varieties have derived from Penstemon rydbergii, mainly due to geographical limitations. P. vaseyanus, only present in south-central Washington, has slightly toothed leaves and grows relatively small. P. rydbergii. var ridbergii is quite showy, bearing thicker stems and larger flowers. Perhaps due to multiple minor variations within this species, it was named after Pehr Axel Rydberg, a botanist and author well-known for naming plants with small morphological differences as a new species instead of a subspecies.