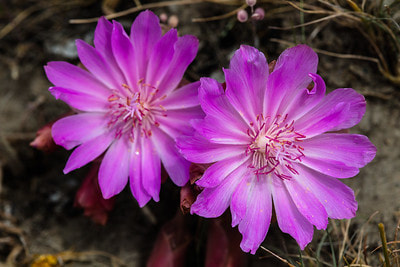 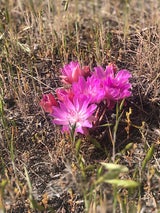 Habit: bitterroot, or rock rose is a little succulent with a woody base and lovely flowers. It has a deep, branched taproot system and low-growing flowering stalks. The leaves are all basal, linear and fleshy, usually withering when the plant flowers in late spring. The showy blossoms are pink or white and bear multiple 1-inch long, elliptic petals supported by almost identical sepals and green, whorled bracts. A dense cluster of stamen and styles complement the beauty of the flower. Older plants produce fruit capsules, containing brown, shiny seeds.

Ecology: it grows in dry, exposed places with stony, thin soils, such as rock ridges and sage brush slopes. It is scattered and locally common at mid elevations on the east side of the Cascades, from British Columbia, to Southern California, and eastward to Alberta, Montana and Arizona.

Growing conditions: bitterroot prefers dry, sunny locations, and grows best in well-drained, rocky soils. It is commonly used in rock gardens, filling in stone wall crevices, or tucked in between rocks of a pathway.

The succulent leaves and roots of this species enable it to hold sizable amounts of water. Similarly to other desert succulents and cacti, this plant is adapted to survive extreme dehydration. The scientific name “rediviva” refers to its ability to survive such drought conditions. The genus name “Lewisia” was chosen in honor of Captain Meriwether Lewis, who collected it in Montana in 1806.

Plains Indians dug bitterroot roots from the ground in the spring, before they got woody and bitter. The roots were cooked and kept for winter food or traded with other tribes. Bitterroot is an important plant for Native Americans, both for its nutritional and cultural value. Some tribes have been harvesting it from the same grounds for multiple generations.