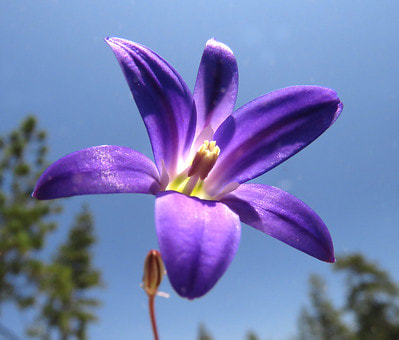 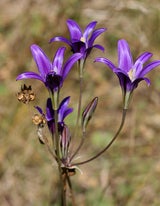 Habit: this showy herbaceous perennial grows from a scaly corm (short, solid underground stem) and produces few linear basal leaves, ranging from 4 to 16 inches long. The foliage dries up when the first flowers bloom in late spring. The corms short stalks bear pedicels (about 2 in long), where lavender-blue to violet flowers with darker mid ribs are arranged in an open umbel. The petals and light green tepals of each flower are fused together to form a funnel-shaped tube. Three flattened staminodes emerge from the floral tube, leaning towards the lobes.

Ecology: Brodiaea elegans displays a majestic vista amid grassy bluffs along the coast and on the foothills of the Sierra Nevada. It is common on dry hillsides, grassy slopes, open meadows and woodlands at moderate to lower elevations. It is found from southern California all the way to Vancouver Island.

Growing conditions: full sun to partial shade. Harvest brodiaea prefers and looks better in well-drained slopes, away from irrigation. After blooming, plants go dormant and should be allowed to dry down. This species is an excellent addition for a rocky garden or to be planted in a guild with other drought-tolerant perennials, such as manzanitas and dodecatheon. Native Americans living along the pacific coast dug up brodiaeas with pointed sticks and ate their bulbs either raw or cooked.