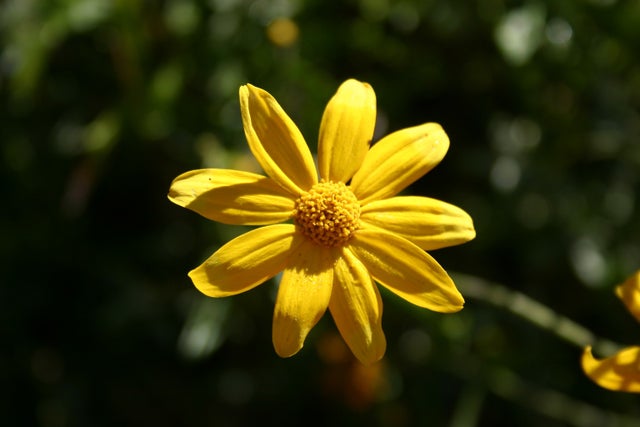 Habit: Oregon sunshine, also known as common woolly sunflower is a perennial herb in the aster family. It grows extensive, large masses of golden yellow flowers contrasting with a low-growing whitish-woolly foliage. The plant’s several stems are 4 to 24 inches tall, bearing leaves up to 3 inches long. Leaves can be alternate or opposite, and also vary in shape from entire and linear to occasionally pinnately lobed. In late spring, stems put out long leafless pedicels topped with blossoms made up of 8-13 broad ray corollas. Rays are marked with distinctive veins or grooves. Disks are arranged in a raised circle in the center of the flower.

Ecology: this species thrives in a variety of habitats, such as sagebrush-steppe, open forests and rocky slopes from low elevations to summits up to 13,000 feet. Its range extends from southern British Columbia to southern California, and from the west coast, east to Montana, Wyoming and Utah.

Growing Conditions: Full sun to light shade, in well-drained to dry, sandy or rocky soils. It is quite drought-tolerant once established, and should not be watered often, unless soil drains really well.

Multiple varieties of Eriophyllum lanatum with different height, leaf shape and number of ray flowers have adapted to the diverse ecosystems they have inhabited over time. Eriophyllum lanatum var. integrifolium, for example, is more suitable for alpine elevations where it gets stunted.