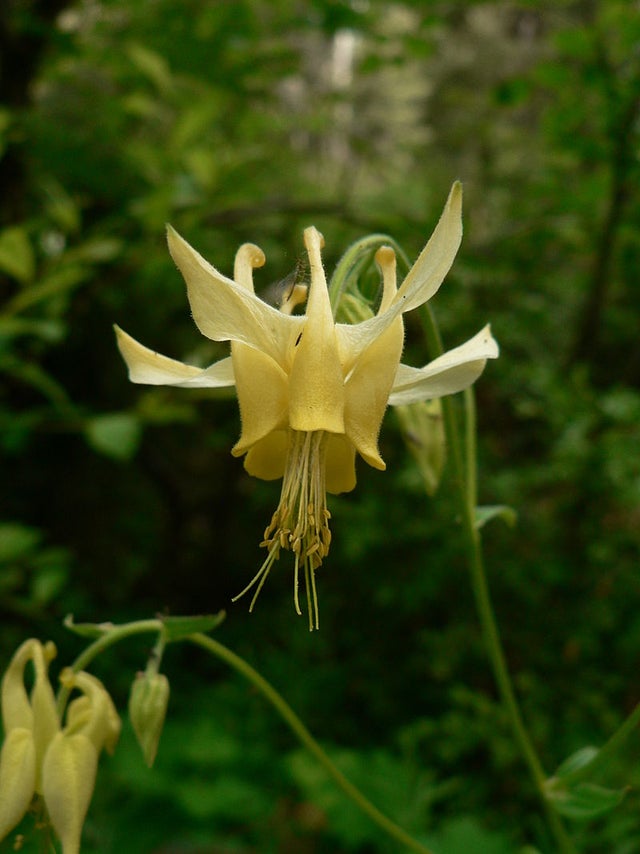 Habit: one of the dearest wildflowers of Western North America, this taprooted perennial herb grows from a woody stem-base, reaching up to 30 inches tall. The foliage is green and dense, sometimes covered in fine hairs. Basal leaves are stalked and pinnately compound, while the few stem leaves are alternate and short-stalked. Each leaf is divided into 3 leaflets, which are divided again into 3 smaller, deeply lobed segments. The plant blooms early June setting out several pendulous flowers, which last all summer long. Flower clusters top erect stems, each one comprised of 5 cream colored petals with nectar spurs at the ends. The spurs are about one inch long and have hooked tips. The largest parts of the blossoms are the showy, yellow or sometimes pinkish sepals and the numerous stamens protruding from the core of the corolla. Fruits are erect, pod-like follicles covered with glands and fine hairs.

Ecology: it typically grows in moist mountain meadows, open forests and rocky slopes at subalpine to alpine elevations. Native communities of yellow columbines are found in the Cascade Range, from southern British Columbia and Alberta to northwestern Oregon, and eastward to Montana, Utah and Colorado.

Growing conditions: favors partial shade and moist, rocky soils. It requires a moderate amount of water. This species is an attractive option for a cool, shady garden and has been listed as the favorite native plant of residential gardeners in Montana.

The scientific name “Aquilegia” derives from the Latin word “aquila”, meaning “eagle”. It refers to the nectar spurs, which were thought to resemble the talons of an eagle.