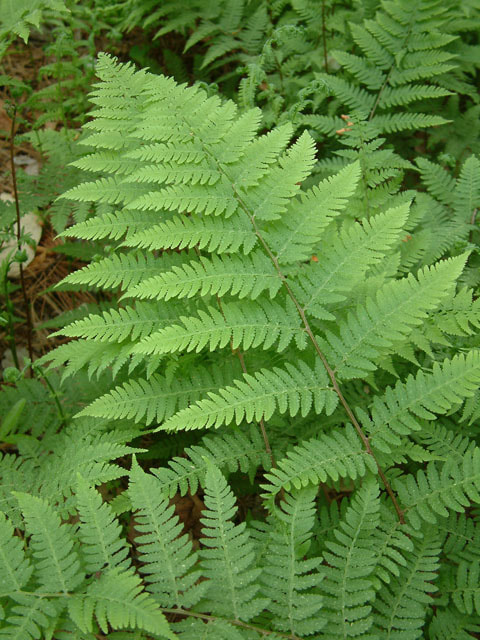 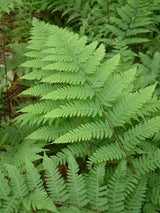 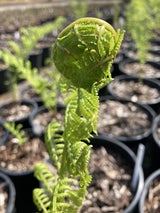 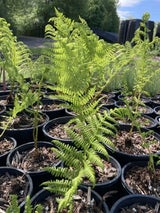 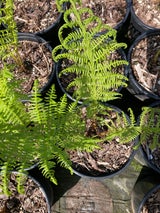 Habit: a large deciduous perennial, lady ferns have fertile, erect leaves which grow up to 6 feet tall. The plant starts from a stout rhizome and forms a vase-like cluster with fragile, scaly, old stalks at the base. Foliage is lacy and soft; and forms lush, intricate thickets during the growing season. Leaves are pinnately branched, bearing 2-3, broad, lance-shaped leaflets (pinna). Each leaflet is composed of 20-40 pairs of lobed segments (pinnules) which become gradually smaller toward both ends of the leafstalk.

Ecology: Widespread across North America, at low to subalpine elevations. It is found in moist to wet forests, thickets, streambanks, meadows and openings.

Growing conditions: lady ferns enjoy partial to full shade, and moist to wet soils. This plant is sometimes considered aggressive, as it might spread to unwanted sites, but it is a beautiful plant for the garden, and an excellent choice for a shady streambank or a boggy area.

Native Americans used lady fern for food and medicinal purposes. They collected fiddleheads in the spring and ate them boiled, baked or raw with grease.

This species is extremely variable, having a number of recognized subspecies. A. filix-femina ssp. cyclosorum, for example, is a subspecies adapted to a different geographical range. It occurs mostly in the northwest.