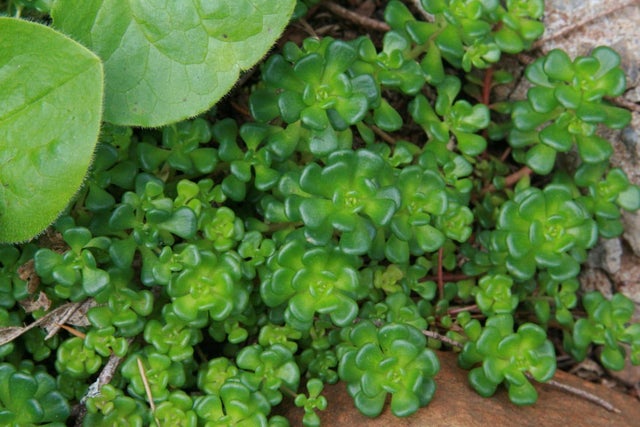 Habit: Sedum oreganum is a succulent, rhizomatous perennial with an interesting habit. It produces both sterile and flowering shoots which grow horizontally at the base and then turn upright. Its evergreen leaves are very small (less than one inch long), fleshy and spoon-shaped. Leaf color is green to occasionally reddish; young foliage is covered with a whitish waxy bloom. Oregon stonecrop becomes even more attractive when in bloom. Clusters of small yellow flowers emerge from the end of stems, bearing long, lance-shaped petals. The tips of the petals are conspicuously pointy and the entire flower turns pinkish with time.

Ecology: Oregon stonecrop usually makes its home in rocky to gravelly areas, such as cliffs and hillsides. It is found at low to fairly high elevations, from Alaska and northwestern British Columbia south to northern California and from the Pacific Coast east into the Cascades. It is occasionally found east of the Cascades as well.

Growing conditions: Enjoys full sun to partial shade, and well drained, moist to dry soil. This species is an easy to care for groundcover for gravelly or rocky gardens. It is a favorite of those who love gardening amidst stones. It looks best tucked into the crevices of a wall or into the cracks in a paved pathway.

Native American tribes, such as the Haida and Nuxalk used Sedum Oreganum as a food source, as well as for medicinal purposes. They ate the leaves of the plant and made a brewed tea from the stalks of the plant. It was believed that the plant eased women through childbirth and breastfeeding the infant.